The stars of tomorrow will take centre stage on Saturday as the West Gippsland Football Netball Competition (WGFNC) welcomes back the return of community sport with the introduction of Junior Round.

The fields and courts of the WGFNC – empty since July 14 – will spring back to life with junior footballers and netballers set to get things back under way.

Some great games are set down for the under-18 competition with six of the seven top teams on the ladder ready to lock horns and put their skills to the test.

Some of our best junior players, who normally play seniors, will get the chance to shine amongst their own age groups and throw in a totally different perspective.

The game between Inverloch-Kongwak and Phillip Island looks to be a beauty with two of the highest scoring teams in the competition set for a great contest at the Inverloch Recreation Reserve.

The Sea Eagles, currently sitting second, are coming off a fast-starting 69-point victory over Bunyip.

Archer Reid has been dangerous for the Sea Eagles this year, kicking 20 goals from seven games, while Bryce Chizzoniti, Jacob Strickland and Jack Rowe have been regular contributors across all nine games this season.

Phillip Island currently sits fourth, but could overtake this week’s opponent with a comfortable victory.

Will Taylor-Eagles was on fire against Dalyston last start, booting seven majors, and will be the main focal point again this weekend. The Bulldogs have a nice spread of goal kickers with Jack Papas, Kyle Griffin, Liam Dayson and Ben Taylor joining Taylor-Eagles in having kicked 10 goals or more this year.

Top-team Garfield could face a drastically improved opponent when the Stars roll out the welcome mat for fifth-placed Korumburra-Bena on Saturday.

The Stars crunched the Giants by 96 points back in round eight, but Korumburra-Bena has some regular senior players that could return to the fold.

Jay Walker, Joel Cuman and Kodie Walker have all been named in the best in senior football this year, while Taylen Loughridge and Byron and Luke Walker have all had a taste of top-flight footy. 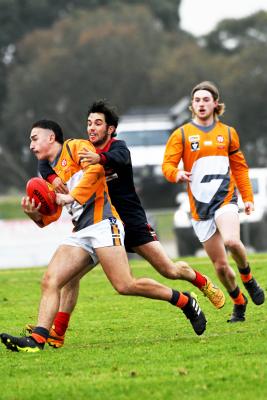 And the Giants take on a Stars outfit that didn’t play for the whole month of July, with two byes, then the Covid lockdown, seeing the Stars sitting on the sidelines for five weeks.

But the Stars also have some senior experience to help overcome their lengthy time away from the game with Josh Evans, Jett Pickering and Andy Fitzpatrick having run out at 2pm at certain times this season.

Stars’ forward Jahmain Harrison has kicked 24 goals this year and will be another player that the Giants will need to keep an eye on.

The battle for the last place in this year’s finals series could be determined at Bunyip on Saturday when the seventh-placed Bulldogs host the sixth-placed Cora Lynn.

It will take a massive effort for the Bulldogs to keep their season alive here with the Cobras a more potent force in the forward line. Dakoda Bolton and Duoth Jock have been the main dangermen up forward but Brandon Borg and Ryley Potter are others that the Bulldogs will need to keep an eye on.

The Cobras also have some unsung heroes in other parts of the ground with Wrang Riek, Owen Hartley, Kris Johnston, Jayden Vela, Adam Menes and Trishane De Silva having played every game this year without hitting the scoreboard.

Let’s hope for a close and exciting game between teams that sit side-by-side on the ladder.

Kooweerup will be chasing its third win for the season and look to jump to seventh place on the ladder when the Demons welcome Dalyston to Denhams Road.

The Demons will be bolstered by some senior talent this week, keen to help the likes of Devlin Parker, Sam Cox and Will Battams to get the job done.

Jesse Depasquale, Dante Di Pietro and Charlie Hobson are others to have flown the flag on a consistent basis for the Demons this year. 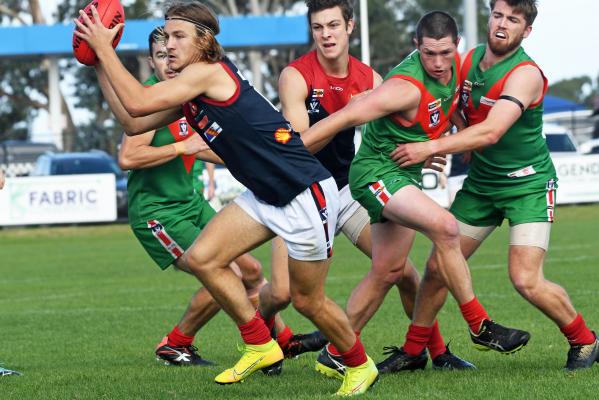 Dalyston hasn’t won a game but is showing some great resilience with Beau Hull, Jesse Booth, Jett Gilliland and Owen Lindsay having fought through every game this year.

Jaxon Foon, Stewart Beaumont and Angus Chisholm will look to hit the scoreboard for the Magpies and claim their first win for the season.

And Nar Nar Goon will look to consolidate its third position on the ladder when the Goon open the gates of Spencer Street for Kilcunda-Bass.

The Goon started the season slowly, losing to Korumburra-Bena and Garfield, but have since won seven games on the trot to make a big impression on the competition.

The Goon has talent galore, with Nate Pipicelli and Cooper Pursell looking set for long and distinguished senior careers, while Jed Murphy, Bayley Tytler, Jack Gribbin and Tex Marsham are others who have had solid seasons to date. 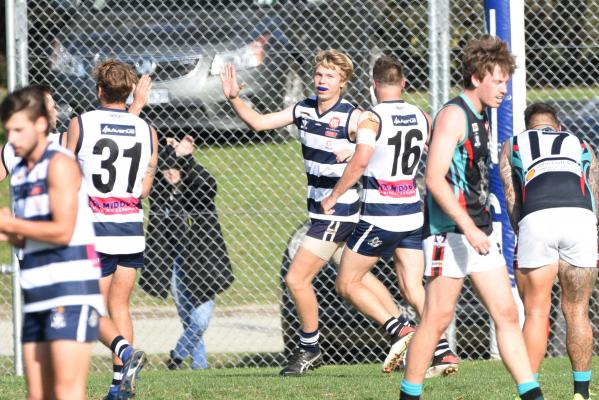 The Panthers have tasted success just once this year but have stuck to their guns defensively and made the opposition work hard for every goal.

Rory Niven, Billy Gatherum, Tyce Kleverkamp and Perrin Wilson have been consistent this year while Jace Nichol will need to hit the scoreboard hard for the Panthers to be a chance.

Overwhelming flag favourite Tooradin-Dalmore will sit on the sidelines this week allowing the rest of the competition to steal the spotlight in a big day of under-16 football.

The Seagulls have the bye – courtesy of their scheduled fixture against Warragul Industrials – leaving fellow finals aspirants Cora Lynn, Garfield, Inverloch-Kongwak and Phillip Island to fine tune their games ahead of this year’s finals series.

The game between Inverloch-Kongwak and Phillip Island – who respectively sit fourth and fifth on the ladder – should be a beauty with the teams playing out a low-scoring thriller the last time they met in round nine.

On a morning better meant for eskimos or ducks, the Sea Eagles prevailed by three points – 1.5 (11) to 0.8 (8) in a grinding slog in some very tough conditions.

The Sea Eagles have had an even spread of goal-kickers this year with Callan O’Flynn, Harry Butcher and Xavier Lindsay kicking 10 goals each – with O’Flynn’s haul coming from just five outings.

James Rowe, Charlie Shaddock and Oscar Ward may not have hit the scoreboard this year but have been steadying players around the ground, while Isaac Seuren, Jack Duff and Zak Box will be players the Bulldogs will need to watch.

Phillip Island also doesn’t rely on one or two players to kick its goals with Sunny Mattock, Lucas Chihotski, Daniel Caffieri and Zac Walker all more than capable of hitting the scoreboard.

Players like Sonny McMillan, Jack Johnston, Noah Muller, Henry Peppard, James McKelvy and Oliver Hibbert have played every game this year and have been the cornerstone of the Bulldogs’ success.

This one should be a ripper with very little separating both sides.

Sixth-placed Kilcunda-Bass could leapfrog both Inverloch-Kongwak and Phillip Island – and find itself in fourth place – if the Panthers can handle the challenge of Nar Nar Goon at Spencer Street on Saturday.

The Goon needs to win to keep its finals hopes alive but will need to turn around a 65-point margin from round nine to get the job done.

That day it was Owen Thomas (five goals) and Phil Winmar (three goals) who did all the damage for the Panthers, with Blake Green and Xavier McDonald chiming in with two goals each.

Will Campbell, Luke Dosiak, Tom Bartels and Patrick Taranto are some of the 14 players that have played every game for the Panthers this year.

The Goon also has some dangerous players with Will Taylor, Kyron Smith, Dan Cross and Lachie Pryor all ready to strike if the Panthers aren’t on their game.

Dalyston will be hoping to chalk up its first win of the season when the Magpies head to Denhams Road to take on Kooweerup.

The Magpies were only 23 points adrift the last time they met the Demons so will have some inner-belief that they can turn things around.

Ryan Gray, Levi Jones, Jaxon Foon and Angus Chisholm have been warriors for the Magpies this year, while Keyva Kay Darts has been their main weapon up forward.

Seth O’Hehir, Corey Lucas, Ethan Neill and Austin Craven have ridden the highs and lows for the Demons this year and would certainly enjoy another win.

Cora Lynn will make the short trip to Bunyip this week fully aware that it needs a strong win to hold on to second place on the ladder.

The Cobras have been outstanding this year, but didn’t get to test themselves against the best when their game against Tooradin-Dalmore was cut short after a serious injury in the first quarter.

That battle can wait for another day with the Cobras playing some great football – being undefeated in their last nine games of football.

Max McDermott has been the star up forward, botting 34 goals for the season, while Kade Perkins, Jett Edwards and Connor Gilbertson have been more than able allies.

The Cobras also have some unsung heroes with Rylan Parker, Flynn Abdallah, Thomas Kervin, Jordan McGrath and Liam Hill being consistent contributors throughout the season.

Bunyip has won two games this season and would love to put together a strong performance against one of this year’s premiership contenders.

Bille Townley, David Forbes, Dennis Pilikidis, Lincoln Morehu and Max Spry are unsung heroes who have stuck to their guns for the Bulldogs this year, while Brody Turner has been the one to keep an eye on up forward.

And Garfield will be out to maintain its lofty position in the top three when the Stars welcome Korumburra-Bena to Beswick Street.

The Stars have been fantastic this year and showed their true credentials by pushing the red-hot Tooradin-Dalmore to just 20 points in their recent round-10 encounter.

That’s the sort of form that could see the Stars go all the way to the big dance, with players like Jake Van Den Berghe, Charlie Fitzpatrick and Ben Tenace-Greenall ready to take on the challenge.

And the Stars have plenty of depth with Levi Reid, Bailey Deveny, Aaron Braaksma, Jake Kellett and Jesse Wouters all having great seasons to date.

The Giants have won three games for the season and have held their heads high against some of the best teams in the competition.

Max Donohue, Tadgh Gannon and Ben Fort have been their major contributors up forward while Riley Sullivan, Tommy Burgess, Ben Fowler, Christian Barany and Tarkyn Walker have played every game this season and have consistently produced their best.

We wish all teams the best of luck on their exciting return to football.